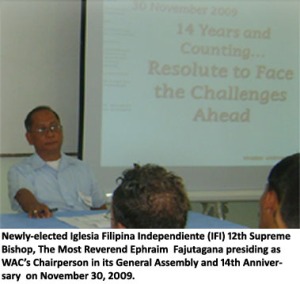 His Eminence, the Most Rev. Ephraim S. Fajutagana is also Chairperson of Workers Assistance Center, Inc.

The Workers Assistance Center congratulates its chair of the board, The Most Reverend Ephraim Fajutagana, as the newly-elected 12th Supreme Bishop of the Iglesia Filipina Independiente (Philippine Independent Church) following its 12th Triennial General Assembly on May 10, 2011.The Most Rev. Fajutagana served as WAC’s chairperson since 2007 during his reign as the General Secretary of IFI. He was the Diocesan Bishop in the province of Cavite from 2002 until his election as General Secretary in May 2005.

He assumed the chairmanship of the WAC’s Board of Trustees   at  the height of political repression and extra-judicial killings of activists   during the  Arroyo presidency. He replaced the late  Bishop Alberto Ramento, who  was  found murdered in his parish in Tarlac City in 2006.

A society that values the dignity of men and women, protects the environment, respect human rights, and enjoys equality and total human development.

To help initiate the formation of workers organizations and unions in the economic zones in the provinces of Cavite and Batangas by assisting the development of the workers’ ability to strive for and attain their just and democratic interests.

To advocate for the promotion of the workers’ rights and welfare and solicit support for their cause.

Organizations and individuals who promote and support workers’ rights and welfare and their struggle to attain democracy.

Assisting workers initiatives in organizing themselves into genuine workers’ organizations and unions that will forward their demands and issues.

Providing appropriate education and training to workers that will raise their consciousness and improve their knowledge, skills, and attitudes.

Providing a venue for the participation of the middle class sectors in workers’issues and struggles.

The Workers’ Assistance Center, Inc. (WAC) was launched on November 30, 1995 as a socio-pastoral program of the Most Holy Rosary Parish in Rosario, Cavite in response to an initial research study made by the program and other church organizations. The study found that a growing number of workers at the Cavite Export Processing Zone (CEPZ) were denied of their basic welfare and right to organize.

In 1997 WAC transformed into a non-government organization to meet the demands of the growing need to organize workers into unions and other labor associations.

WAC’s core program is the organizing of workers primarily, but not limited, in export zones and industrial enclaves. The program combines organizing, campaigning, and alliance-building. All the other programs and services of WAC – such as the Labor and Gender Education Program (LGEP); the Research, documentation, Information, and Publication (RDIP) Program; the International Relations Program (IRP); and the Legal and Paralegal Assistance Program (LPAP) – are all geared to supplement and strengthen the organizing program.

The founding of the Solidarity of Cavite Workers (SCW) and the formation of the Batangas Labor Solidarity (BLAST) as province-wide labor alliances that promote and uphold genuine, militant, and nationalist unionism help in the coordination and strenghtening of labor unions, workers’organizations and local chapters organized within the respective provinces.

The creation of the Friends of the Workers (FOW), an organization of groups and individuals supportive of the workers’ cause and struggles.

Since 2005, the organizing of the workers and residents in the communities around the economic zones as support mechanisms for labor struggles and for the multi-sectoral defense of the people’s rights and welfare.

Assisting and suporting the labor unions and the provincial alliances in the conduct of campaigns for the betterment of working conditions and the respect of labor and democratic rights.

Labor and Gender Education and Training

Conducting seminars and trainings on labor concerns including workinf conditons, labor rights and welfare, women workers’ rights, union organizing and management, organizational leadership and development, education work, and other relevant topics; and on currently relevant democratic and socio-economic concerns affecting women and workers including courses on Philippine History, wages and Crisis, Oil Price Hike, and others.

Establishing and strengthening of solidarity among organizations and individuals in various countries abroad for campaign support and advocacy on workers issues and struggles.

Providing free legal and paralegal consultations, counsels and other necessary services to workers.

Strengthening workers capability by providing seminars and trainings on paralegal and legal tactics and processes.

05 February 2008, Rosario, Cavite — Impressed by the organization’s continuous advocacy for the rights and welfare of the labor sector, the Workers Assistance Center (WAC) was chosen by the Tji Hak-Soon Justice and Peace Foundation in South Korea as the recipient of its 2008 Justice and Peace Award.

WAC is the 11th Justice and Peace awardee of the foundation since it was founded in 1997. The award consist of US$ 10,000 and a medal which shall be formally presented to WAC in a ceremony to be held in Seoul, South Korea on March 10, 2008. WAC’s Executive Director Rev. Fr.  Jose Dizon will accept the award on behalf of the WAC’s Board of Directors and staff.

The award is a fitting tribute to the more than twelve years of WAC’s unwavering advocacy for the rights and welfare of the Filipino working class, said WAC’s Chairperson  Bishop Ephraim S. Fajutagana of the Philippine Independent Church.

He further expressed that “the principles practiced by WAC for the benefit of hundreds of thousands of workers who are exploited, manipulated, harrassed and exposed to various forms of human rights  violations is worth of the prestigious award given by the foundation.”

The WAC is not only honored by the award. It is also deeply inspired by this kind of recognition coming from a Korean foundation whose own compatriots investing at the Cavite economic zones are the most handled cases by the WAC in terms of labor rights violations.

With this award, our late beloved Chairperson Bishop Alberto Ramento, who was murdered in 2006, had already been provided a share of his justice even not from the rule of law but by way of recognition for what he had fought and died for as one of the staunchest advocate of the workers rights. The Justice and Peace Award is presented annually by the Tji Hak-Soon Justice and Peace Foundation to individuals and organizations who fight for justice, peace, and human rights even in the face of an oppressive system and at the great risk of their lives.

The Tji Hak-Soon Justice and Peace Award is the only international human rights award in South Korea that is entirely funded by the public to commemorate the life, works and beliefs of the late Most Reverend Bishop Daniel Tji Hak-soon who stood and fought for social justice and democracy during the military dictatorships in South Korea.

It is sponsored by the Tji Hak-soon Justice and Peace Foundation and supported by the Korea Broadcasting System (KBS), Pyonghwa Broadcasting  Corporation (PBC), the Hankyore newspaper, the Catholic Times, and the Pyonghwa newspaper.

The Workers Assistance Center was established in 1995 in Rosario, Cavite to empower, assist, and defend the workers against all forms of human and labor rights violations for the realization of theirsocio-economic well-being. The WAC in its advocacy  focused on three core rights of the workers – the rights to free association, strike and other collective actions, and collective bargaining. The Center has  offices in Cavite and Batangas Provinces.

In a related development, WAC was among the three organizations honored by the Canadian Maquila Solidarity Network (MSN) for the year 2007 as “Heroes of the Anti-Sweatshop Movement” in  recognition of “the heroes of … the grassroots labour, women’s and human rights organizations that defend the rights of the young women and men who labour behind the brand-name labels”. The Honor was a recognition of WAC’s resolute advocacy of the workers right to form unions and fight for their basic rights and welfare notably for higher wages, better working conditions and respect for labor and democratic rights.

MSN took particular note of WAC’s assistance to the striking workers of Chong Won Fashions, Inc.  amidst unrelenting harassment and violent attacks on the striking workers by the police and security forces of the Philippine Economic Zone Authority (PEZA) and the company. Chong Won is a Koreanowned garment factory located at the Cavite Export Processing Zone in Rosario, Cavite that produced garments for a US Giant retailer Wal-Mart.

The campaign for the striking workers of Chong Won  Fashions was the first time ever that WalMart  admitted to a violation on the workers’ right to organize in one of the factories in its supply chain.  The  campaign was a collaboration between the MSN, the International Labor Rights Forum (ILRF), the WAC,  and the Nagkakaisang Manggagawa ng Chong Won (United Workers of Chong Won), the workers’ union.